Amber Heard Having BPD is Bad News for All of Us! 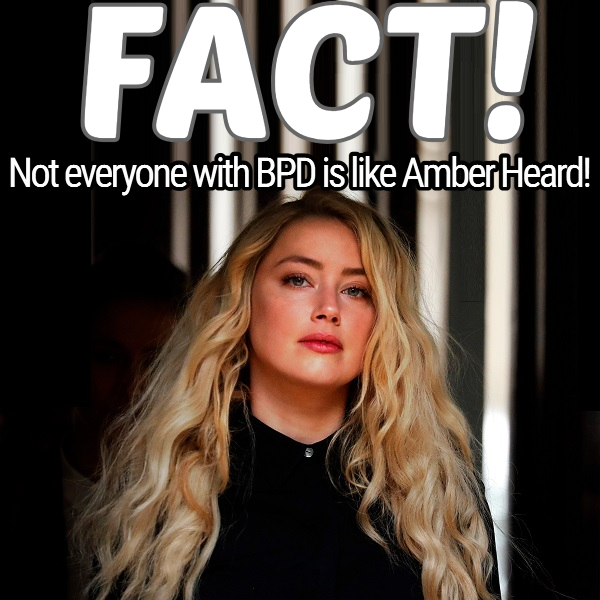 Unless you have been living under a rock you might have noticed a certain court trial going on in which Johnny Depp is suing Amber
Heard for loss of earnings due to an article she published which she still claims was not about Johnny Depp himself. But this article is not about disguising the complexities of that case as a lot of the evidence is ‘he said’, ‘she said’.

This article is disgusting the news that a psychologist hired by Johnny Depp testified that amber heard has Borderline Personality Disorder. While we can not say for sure if she has or hasn’t got the disorder we are unhappy to hear that this was the diagnosis because we feel it is bad news for all of us BPD sufferers…

The Main Problem is…

The first main issue with this Psychologist’s report is that it seamlessly merges in with everything that you could also diagnose Amber
Heard with. Sure, it also says she might have PTSD and Histrionic Personality Disorder (HPD) which does cover her excessive attention-seeking behaviour. But as we woke up this morning with the news of the report all the main headlines read that she has BPD and very little else. People will often just read the headlines and skim over the main article talking about all the other things she could (or could not) have wrong with her.

Sadly there is plenty of stigma already attached to those of us with BPD from being manipulators to being difficult to work with making many therapists not take us on in the first place. This news that Amber Heard might have BPD (Yes I said ‘MIGHT’ because Shannon Curry didn’t sit down with Amber Heard, she only diagnosed her based on the behaviour she witnessed in evidence form) isn’t going to help those of us who are already dealing with the stigma there is out there already let alone with this on top.

The final point of why this could well be bad news for those of us already suffering from BPD is the sides people take. The majority of people are on Johnny Depp’s side and see this as his stand up to Amber Heard’s manipulative and narcissistic behaviours towards Depp. So they already see AH as the bad person and that is not good for those of us with BPD.

Sadly on the other side is AH fans who are refusing to accept the BPD diagnosis and only see it as a pathetic attempt at a smear campaign from team JD, so they to are already seeing it as something bad/negative.

For all of you reading this who have BPD just know that this will all soon blow over and people will move onto the next high-profile court case. Sure, it has added even more stigma to our condition, but we have lived with stigma ever since the condition was printed in the DSM-III. We will move on from this and will once again break this stigma bubble that surrounds us.

Your IQ level Might Affect How Well you React to Therapy